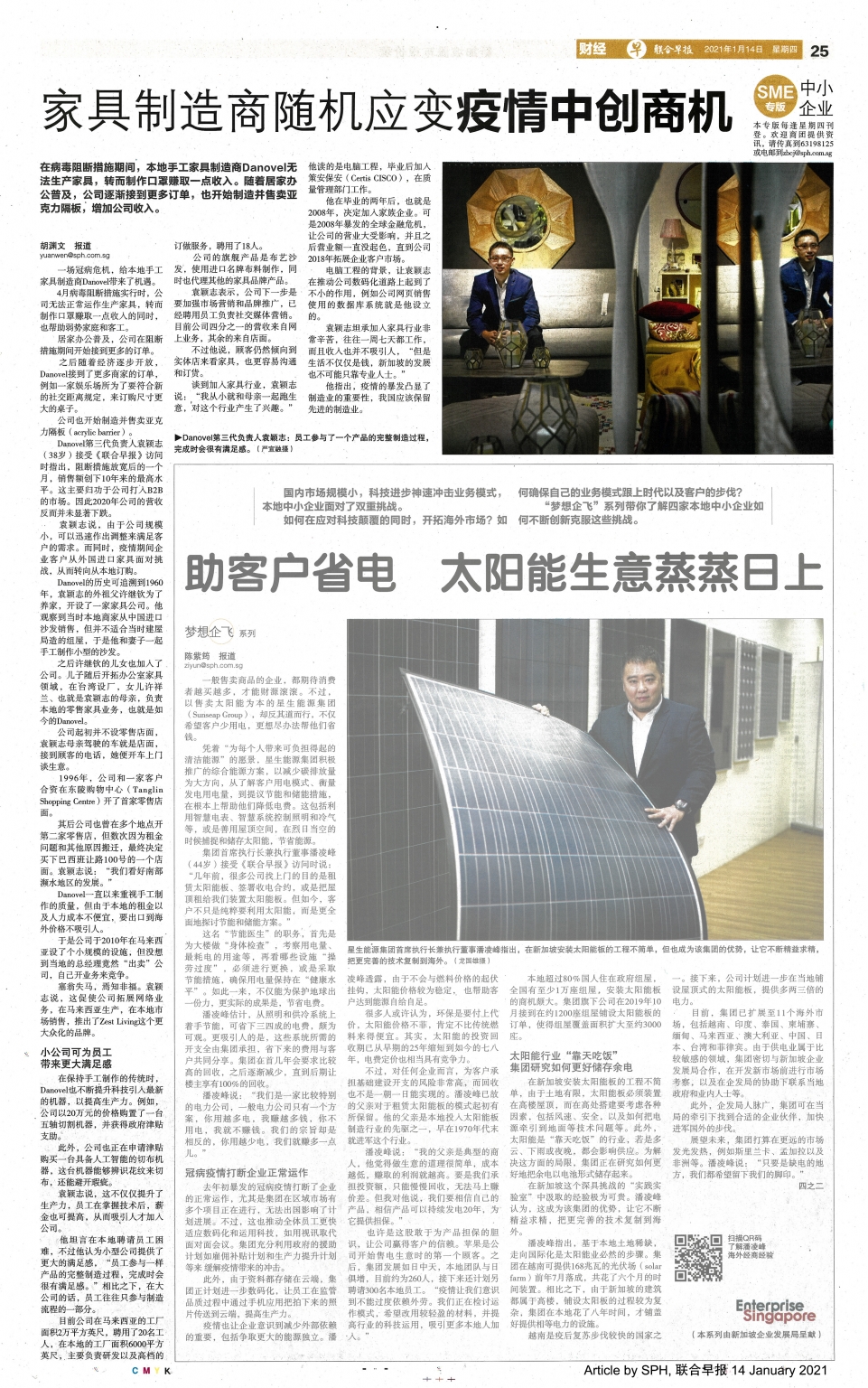 During the COVID-19 lockdown, local heritage custom furniture manufacturer Danovel was unable to produce furniture but turned to make masks instead. As home office had become the new normal, the company gradually received more orders and increased its revenue by a transformation to manufacturing and selling of acrylic barriers and reusable masks.

The 2020 coronavirus crisis has brought new opportunities to Danovel, a local heritage bespoke custom furniture manufacturer. Following the lockdown in April 2020, the company could not function normally to produce furniture, but turned to reusable masks production instead, which not only secured some revenue for the company, but also allowed the company to provide help for low-income families and foreign workers in need, by the mask give away initiative it has embarked on.

As working from home had become the new normal, the company was also able to receive orders during the lockdown period. Later, as the economy gradually started to recover, Danovel began to receive more orders from various businesses in preparation of reopening for business. For example, in order to comply with the new social distancing rules, an entertainment establishment ordered larger furniture for their premises.

The company also started to manufacture and sell acrylic barriers.

In an interview with Zb Sunday, Yuan Ying Zhi (aged 38), third-generation CEO of Danovel, pointed out that one month after the lockdown rules were relaxed, sales of the company had reached the highest level in a decade, which was mainly due to the company’s involvement in the B2B market. As a result, despite the impact of coronavirus, revenue of the company did not decline significantly in 2020. Mr Yuan explained the company being small, it was able to adjust quickly to meet the needs of its customers with some business transformation. Since it was difficult to import furniture from abroad due to the pandemic, many customers turned to order locally.

The history of Danovel can be traced back to 1960, when Mr Yuan’s grandfather, Koh Kee Khim, started a furniture company to support his family. He observed that local businesses imported sofas from China for sale, were actually unsuitable for the flats built by the housing construction bureau at that time. As a result, he began to make smaller sofas by hand with his wife as a trade. Later, Mr Koh’s children joined the company. His son expanded the business into the field of office furniture and set up a factory in Taiwan. While his daughter, Xu Xiang Lan, mother of Mr Yuan, took charge of the local retail furnishing business.

At the beginning, the company did not have any retail store. Mdm Xu used her car as a “ mobile store” and drove to her customers whenever she received a call.

In 1996, it was when the company established its first retail store in Tanglin Shopping Centre in partnership with a happy customer. Later, the company attempted to open a second retail store in several locations but had to move several times due to problems with rent and other complications.

Finally, the company decided invested in their own premise at 100 Pasir Panjang Road as long term planning consideration. “We were optimistic about the development of the southern waterfront area”, said Mr Yuan Ying Zhi.

Danovel has always attached great importance to the quality of handmade products. However, since the local rent and labor cost were considerably high, overseas export has not been a cost-effective option for the company. As a result, the company set up a small-scale facility in Malaysia in 2010.

Yet, unexpectedly, the local manager “betrayed” the company by starting her own business to compete against Danovel.

However, we never know how fate turns, this misfortune was a blessing in disguise. Mr Yuan said that this had prompted the company to expand its online business while producing in Malaysia and selling in the local market, which ultimately led to the birth of the brand of Zest Living, a mass market affordable furniture brand.

While maintaining the handcraft tradition, Danovel has always been trying to improve productivity by using advance machines and upgrading itself to the latest technology. For example, with the subsidies from the government, the company purchased a five-axis CNC cutting machine for two hundred thousand Singapore Dollars. Danovel is also currently working with them in their next phase of development which is an automatic fabric cutting machine, that can recognize patterns and avoid defects while performing cuts automatically.

According to Mr Yuan Ying Zhi  the improvement of technology not only maximized productivity of the company, but also raised the average salary of its employees, and this would possibly attract more younger talents to join the company. He admitted that it was difficult to hire local employees, but he believed that smaller companies could provide greater satisfaction. “Employees usually feel a great sense of satisfaction for participating in the whole manufacturing process of a product”, explained Mr Yuan Ying Zhi. This is not usually the case in larger companies, where employees could only participate in part of the manufacturing process.

Mr Yuan remarked that the next goal for the company was to strengthen marketing and brand promotion. In order to achieve this, new employees were hired to take charge of social media marketing. At present, a quarter of the company’s profits came from online transactions, the rest came from storefront businesses. However, Mr Yuan said that customers were still more inclined to look at furniture in physical stores.

Speaking of joining the furniture industry, Mr Yuan Ying Zhi said: “I have been participating in the family business with my mother since I was a child and gradually grew an interest in this industry.” After graduating with a double degree in computer engineering and computer science, he joined Certis CISCO and worked in the quality management department. In 2008, two years after he commenced his working life, he decided to join the family business. However, the company was greatly hit by the global financial crisis in 2008 and did not recover until 2018 after an expansion of its customer market.

With a background in computer engineering, Mr Yuan Ying Zhi played a significant role in promoting digitalization for the company. For example, he set up the database system for online marketing, which hugely increased productivity for the company.

Mr Yuan Ying Zhi admitted that careers in the furniture industry were not easy. Working seven days a week has been the normal and the income has not been that attractive. “However,” said Mr Yuan Ying Zhi  “life is not just about money. Despite contributions made by professionals in particular fields, more efforts are needed for Singapore’s development”. He pointed out that the pandemic has highlighted the importance of the manufacturing industry and believed that Singapore should retain an advanced manufacturing industry.